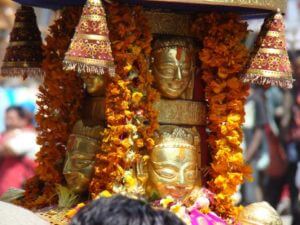 Hidimba Devi temple (or Hadimba Temple),  in honor of Bhima’s wife Hidimba, is in Manali, Himachal Pradesh. It is in the midst of a forest- Dhungri Van Vihar. The sanctuary is over a huge rock jutting out of the ground which the devotees worshipped as an image of the deity.

What is the history of the Hidimba Devi Temple?

According to the history of Hidimba Devi Temple, the complex was built in 1553. There are also a few local folktales that go around. One of them says that after Pandavas, along with Kunti Devi escaped the fire in the Lakh palace, they came to this area (current temple area).

At that time the rakhshasa king whose sister was Hidimba, ruled the place.

Bhima fell in love with her and married her. They eventually giving birth to their son Ghatotkacha. Hadmiba meditated in Dhungri region near Manali. She gained supernatural powers after her tapasya. She was very kind and thus became quite popular amid the locals. They erected a ‘pagoda’ style temple and dedicated it to her, Hadmiba Devi. Another legend says that Maharaja Bahadur Singh during 1552.

What is the significance of Hidimba Devi Temple?

The significance of the Hidimba Devi Temple is that it has a 24 m high tower. The three tiers of its square roofs are covered with timber tiles, while the conical roof is clad in metal. Moreover, Devi Durga forms the theme of the main doors carvings.

Further, the temple base consists of whitewashed, mud-covered stonework. An enormous rock occupies the inside of the temple, only a 7.5 cm (3 inch) tall brass image representing goddess Hidimba Devi.

According to a legend, in bygone days religious zealots would tie the hands of “sinners” by the rope and then swing them against the rock- thus a rope hangs against the rock.

70 m away a shrine exists dedicated to Ghatotkacha.

What are the timings at Hidimba Devi Temple?

Here are the timings of Hidimba Devi Temple:

What festivals are celebrated at Hidimba Devi Temple?

Some of the festivals celebrated at Hidimba Devi Temple are:

How to reach Hidimba Devi Temple?

Where to stay in Manali?

Some places where one can stay near temple are:

Some of the places that one can visit nearby are: