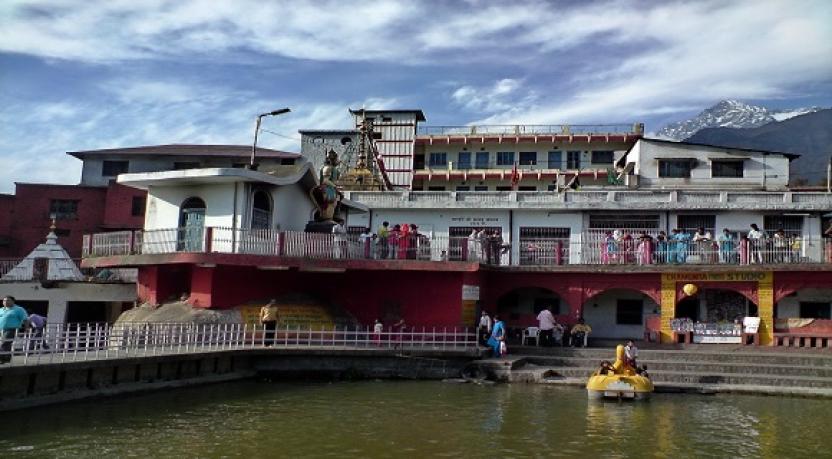 Chamunda Devi Temple is located in Kangra in Himachal Pradesh. The name Chamunda is derived from two words, Chanda and Munda. Chanda and Munda were two monsters who were killed by Devi.

Chamunda is also known as Chamundi, Chamundeshwari, and Charchika. Goddess Chamunda is also one of the chief Yoginis, a group of sixty-four or eighty-one Tantric goddesses, who are attendants of the warrior goddess Durga. She is closely associated with Kali Ma, another fierce aspect of Devi. She is sometimes identified with goddesses Parvati, Chandi or Durga as well. The goddess is often portrayed as haunting cremation grounds or fig trees. The goddess is worshipped by ritual animal sacrifices along with offerings of wine and in the ancient times, human sacrifices were offered too. Originally a tribal goddess, Chamunda Devi was assimilated in Hinduism and later entered the Jain pantheon too. Though in Jainism, the rites of her worship include vegetarian offerings, and not the meat and liquor offerings.

The famous Chamunda Devi is an abode of Shiva Shakti since the saga of Puranas. According to a legend, the Goddess Chamunda was enshrined as chief Goddess with the title of Rudra in the battle between demon Jalandhra and Lord Shiva which made this place famous as ‘Rudra Chamunda’. Another legend has it that ‘Savarni Manamantra’ battle between the gods and demons, Chamunda emerged as Chandika from an eyebrow of Goddess “Kaushiki” and was assigned the task of eliminating the demons “Chand” and “Mund”. Chandika fought a fierce battle with these two demons and, at last, killed them. Goddess Chandika took the slain heads of the two demons “Chand” and “Mund” to the Goddess “Kaushiki” who being immensely pleased, blessed Chandika and bestowed upon her the title of “Chamunda,” the name which is famous all around the world.

Chamunda Devi is worshipped daily while the sermons include ‘Aartis’ at intervals. Reciting the hymn of ‘Shat Chandi’ with devoted heart at this temple is considered auspicious. In the corner of the temple, one can see small footsteps of the Goddess on a stone. Besides the main shrine, there is a marble staircase that takes down to the cave of Lord Shiva. This is a cave-like scoop where Shiva Lingam is placed. People visit this cave and worship Lord Shiva with great devotion.

Lord Shiva is said to be one of the complex Gods of the Hindu pantheon since he is the destroyer as well as the restorer. Here, Lord Shiva is believed to have been present in the form of death, destruction, and dead bodies. One can also observe ancestral worship near the banks of Ban Ganga River. In the vicinity of this temple, there is a cremation ground that serves to 22 villages of the nearby areas.In the temple complex, there is a huge pond with images of Lords and people can take bath here. There is the sculpture of Goddess, in which, she is garlanded with serpents, scorpions, and skulls. During the time of Navratras, the temple is crowded by a large number of people. Pilgrims from far and near come to visit this temple of the great legacy and religious importance. Chamunda Devi blesses all her true devotees. The temple is situated in the picturesque beauty of lush green mountains. Many saints can be seen here involved in penance and meditation. In the past days, the image of the Goddess was situated on the hill above the present site of the temple. The site was found to be in a remote area, where it was not possible for everyone to reach and moreover, it was quite risky. There is a story behind the establishment of this temple.

Darshan in Chamunda Devi Temple starts from 6am to 12pm and then 1pm to 9pm. The temple trust gives Naivedyam to the Goddess from 12pm to 1pm. During this time, the devotees are not allowed to enter the temple. During summer, Arti begins from 8am to 6pm whereas during the winter season it begins from 8am to 8pm.

How to reach- Road, Rail, and Air

There is various dharamshala facility provided fo the devotees. The Temple Trust has themselves made dharamshalas for the devotees as well as tourists. Apart from dharamashalas, there are many hotels as well as private organizations that provide dwelling facilities to the people. The hotels have nominal charge keeping the need and budget of the devotees and the tourists. The hotels provide clean and hygiene environment to the tourists as well has good and hygienic food. Many hotels provide wifi facilities to the tourists so that they keep themselves connected to the whole world.

Place to eat in Kangra

Chamunda Temple provides food to its devotees. They are free of cost and all the expenses incurred are borne by the Trustees. Once the daily Puja is over, devotees are allowed to move for food. These food are made in a very hygienic condition maintaining the dignity of the Temple. The food includes three main courses and is given in plenty. All the expenses incurred are borne by the temple trust. Apart from the prasad provided in the temple, one can also have food from hotels outside the campus. These hotels provide clean and hygienic food. There are various other places to eat food. There are many hotels and cafe which provide food keeping the taste and needs of the devotees. They cost very nominal keeping the needs and budget of the tourists.

Nearby places to visit