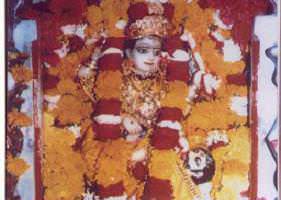 Baglamukhi at Datia in Madhya Pradesh consists of a Hindu temple and an Ashram. It is also called as ‘Tapasthali’ as there are many mythological and real people who have considered this to be a supreme place for meditation.

The power of Shakti of Mother Goddess is worshiped here and it is an important place of worship. The Shivalinga of Shree Vankhandeswar Shiva is inspected and approved by the Archaeological Survey of India to be of the same age as that of the Mahabharata.

Goddess Baglamukhi is also known as Pitambara Maa. Once upon a time, there was a huge storm that erupted over the Earth. As it threatened to destroy the entire creation, all the Gods assembled in the Saurashtra region. Goddess Baglamukhi emerged from the ‘Haridra Sarovara’, and appeased by the prayers of the gods, calmed down the storm.

Another popular legend surrounding this temple states that there was a demon named Madan who underwent penance and won the boon of vak siddhi, according to which whatever he said, happened the exact way. Starting to take his boon as a point to torture innocent people, the heavenly livings were severely enraged, thereby worshipping Baglamukhi.

The Goddess stopped the demon`s rampage by gripping his tongue and silencing his speech forever. However, before she could kill him, he requested her that he is worshiped alongside the goddess, and she yielded. That is why Madan (the demon) is shown with her together.

Shri Pitambara Peetha is counted by the devotees among the most famous temples of Baglamukhi which was established by Bramhaleen Pujyapaad RashtraGuru Anant Shree Swami Ji Maharajin 1920s. He also established the temple of goddess Dhumavati within the ashram. Dhumavati and Baglamukhi are the two of the ten Mahavidyas.

Pujyapaad was also referred as ‘Swamiji’or ‘Maharaj’ by the devotees. There is no individual who had any information about either his identity or his place of origin. Moreover, he too did not disclose any such facts to anyone. However, he was a Parivrajakachrya Dandi Swami, who stayed on in Datia for a long period of time. He was and still is a spiritual icon for many who visit the Peeth or have been associated with him directly or indirectly.

During the Indo-China war, A Rashtra Anushtan Yagya was started in this temple which later was completed successfully. Maharaj Ji then thought of establishing the Dhumavati temple and also penned down the literature for the same.

In the year 1965 or 1971, Sri Datiya Pitambara Peeth has replied with vigor and established a spiritual attack by Tantrik Anushthanam to thwart the enemy’s efforts. The retreat of the enemy’s forces took place with the completion of the anusthanam. The same was organized during the Pakistani invasion on the Kargil front.

Shri Pitambara Peetha is one of the most famous Shakti Peetha of Baglamukhi Devi at Datia in Madhya Pradesh. It is situated at a distance of approximately 75 km from Gwalior and approximately 30 km from Jhansi.

Pujyapaad Swamiji was a strong devotee of the Goddess Pitambara. He had a natural inclination towards the Sanskrit language but also possessed sufficient knowledge of Urdu, Persian and Arabic, English, Pali, and Prakrit languages. In addition, he was fond of classical music and various great classical musicians of that time used to visit the ashram.

Pujyapaad had led innumerable gatherings and associations for the protection and welfare of both the humanity and the country in large. Living legend who knows about Swamiji is Pt Shri Gaya Prasad Nayak Ji (Babuji) of Garhi Malehara. Pujya Swamiji Maharaj and Babuji’s Guruji were Gurubhai.

Some of the musicians who visited the ashram comprise of Pundit Gundai Maharaj, Siyaram Tiwari, Rajan and Sajan Mishra, Dagar Bandhu etc. One of the greatest classical musicians Acharya Brihaspati was the follower of Pujyapaad.

Moreover, one can also find many temples of Parshuram, Hanuman, Kal Bhairav and other god and goddess stretched across the large area of Ashram.

The Peeth is currently maintained by a trust.

The Ashram also maintains the Sanskrit library which was established by the Pujyapaad. One can get sufficient information that explains the history of the Ashram and the secret Mantras of various kinds of Sadhanas and tantras.

The blessings of Guruji helped Ustad Aadil Khan to recover his lost voice and from then on he became a disciple of Shri Maharaj-Ji.

One of the distinct specialties of the Ashram can be referred to the approach to spread the light of Sanskrit language to young children, free of cost. The Ashram also conducts Sanskrit debates across the years.

A devotee can see the Haridra Lake located in front of the main temple and at the back; there are an office and other buildings.

No individual is allowed to carry leather items in the form of a waist belt, wallet, purse etc inside the temple premises even after removing your footwear.

Devotees are encouraged to wear garments in yellow color during Sadhana.

Festivals celebrated at the Baglamukhi Temple

How to Reach Baglamukhi

There are many hotels and lodging facilities available for people to stay at Datia in Madhya Pradesh. At a distance of only 1-2 km from the Pitambara Peeth, there are many Dharamshala that offer good accommodation at competitive prices. For an individual visiting alone, putting up at dormitories is also a good alternative. For people looking for luxury, there are many hotels that provide pickup and drop services to airports and railway stations for its clients. In addition to that, these fine places of accommodation also come with its own exclusive restaurants. In order to avoid any confusion, it is better to book the rooms in advance.

Madhya Pradesh also called as the ‘heart of Incredible India’ is famous for its variety of food. From vegetarian to non-vegetarian dishes, there are a plethora of options to suit the appetite of every traveler. If you want to enjoy a complete meal then, the Thali is a good choice. It is a balanced diet that contains all the essential ingredients. Additionally, there are many breakfast options, for example, poha, jalebi, samosa etc. This state is also famous for its sweets which are made of milk and has a unique taste. A tourist visiting this place makes it a point to taste some of the namkeens that are widely popular in this region. There are many local eating joints that provide food at a reasonable price.

For people looking for fine dining, there are many high-end restaurants that provide exotic dishes and sea food as well. Although the charges are comparatively high, they provide international cuisine and live music for the audience. Moreover, one can also customize any requirement in food and there are chefs who provide services as per the requirement of the client. So, it is sure that every person is bound to enjoy some wonderful delicacies with their loved ones and make memories that are worth cherishing in one’s lifetime.