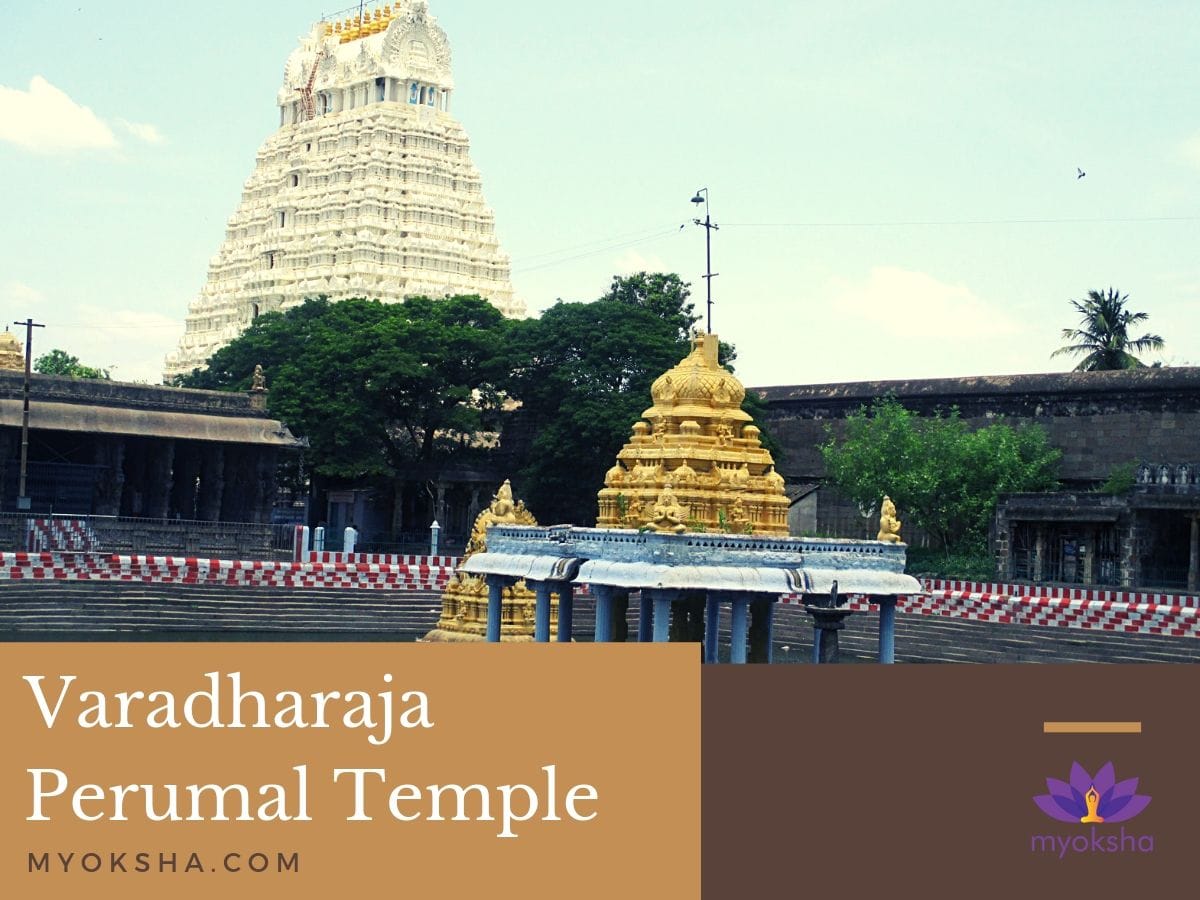 Varadharaja Perumal Temple is a Hindu temple dedicated to Lord Vishnu located in the holy city of Kanchipuram, Tamil Nadu, India This is also known as Hastigiri and its original name refers to as Attiyuran.

The actual image of the Perumal was developed from the Attimaram or the fig tree and it is worshipped for 10 days once in every 40 years.

This holy shrine is considered to be one of the ‘Divya Desams’ temples, the 108 Lord Vishnu temples are believed to have been visited by the 12 poet saints or Alwars. These people used to sing in praise of the Lord. It is located beside the Vedapureswarar Temple and is administered by the same Trust as well.

Varadharaja is reffered as the King of Devas who is a boon giver.

What is the significance of the Varadharaja Perumal Temple?

The significance of the Varadharaja Perumal Temple lies in:-

There is a common legend associated with most of the Vishnu temples in Kanchipuram.

The Temple history states that:-

100 pilliared mantap comes on the left after passing Raja Gopuram, is astonishing with beautiful sculptures.

Hotels in Tamil Nadu: Where to stay

When on a visit to Kanchipuram, a traveler need not worry about accommodation. There are many affordable yet high-quality lodging services available in this place. Most of the hotels are situated near the city bus stand. There are some expensive guesthouses that provide both modern facilities and a peaceful environment for the pilgrims.

From deluxe rooms to air-conditioned spaces, there’s every option presented to suit the needs of a devotee. In addition, the hotels in Kanchipuram are known for their traditional warmth and hospitality. The cost of the rooms varies as per the services that a visitor opts for.

Kanchipuram in Tamil Nadu offers a wide range of delicacies when it comes to fulfilling a traveler’s appetite. Each part of India stands unique for its own taste and flavor and this holds true when you come to Tamil Nadu as well.

From traditional South Indian food like rice, sambhar, rasam to awesome breakfast options like poha, upma, dosa and vada, there are countless recipes worth trying.

You can taste the same from local eateries or can opt for fine dining as well. And for those individuals who are looking to try out some international cuisines, this southern state will take you by surprise. From Chinese to Italian, Thai and Mexican, a food lover is surely spoilt for choices.

Along with the variety of food, the dishes are also moderately priced. Tourists are recommended to try the famous coffee that is prepared with fresh milk and simultaneously loved by every person who visits this place.

Is it possible to do Darshan in a Single Day?

Yes, It is possible to do Darshan in a Single Day.

Is there any private Queue for the people with Disability?

Yes, there is a private Queue for people with disabilities and for senior citizens.

How much is required for Exploration?

Is there any Perumal statue inside the temple?

Yes, Varadharaja Perumal statue is places inside the Temple.

What are the timings of the Temple?

If you have any questions about the Varadharaja Perumal Temple, please leave a comment below, and we will get back to you within one hour.