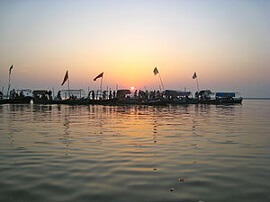 The word “Sangam” originates from Sanskrit language which means the confluence of three rivers. These three rivers are Ganga, Yamuna and the mystical Saraswati. However, the river Saraswati is invisible. According to popular beliefs, it flows underground and joins the two rivers. This Sangam is called Triveni Sangam.

This confluence is at Prayaga which is Allahabad‘s ancient name. The legendary Kumbha mela is held there every 12 years. The Sangam is a sacred place for Hindus. A bath here washes away one’s sins. It also frees one from the cycle of rebirth to finally attain ‘Moksha’.

The sacred holy site of sangam is located at about 7 km from Civil Township at Allahabad in Uttar Pradesh.

History of the Kumbha Mela

The word Kumbha means the immortal Pot of Nectar, which the Demigods (Devtas) and Demons (Asuras) fought over. Our ancient scriptures like the puranas also mention how the demigods and demons together made the nectar of immortality and decided to share it equally.

Thereafter, to churn the portion of the milky ocean they came at the sea shore. Then they used Mandara Mountain as the churning rod.  But a deadly poison was produced at first. Lord Shiva drank the poison but it did not harm him. However, a few drops were spilled and licked by serpents and reptiles.

After 1000 years of churning, Dhanwantari appeared with the Kumbh of immortal nectar in his hands. The demigods were fearful of the demons’ ill intent. So, they forcibly seized the pot and entrusted its safety to the four Gods – Brahaspati, Surya, Shani, and Chandra.

How to reach Triveni Sangam Allahabad

Places to visit nearby Triveni Sangam