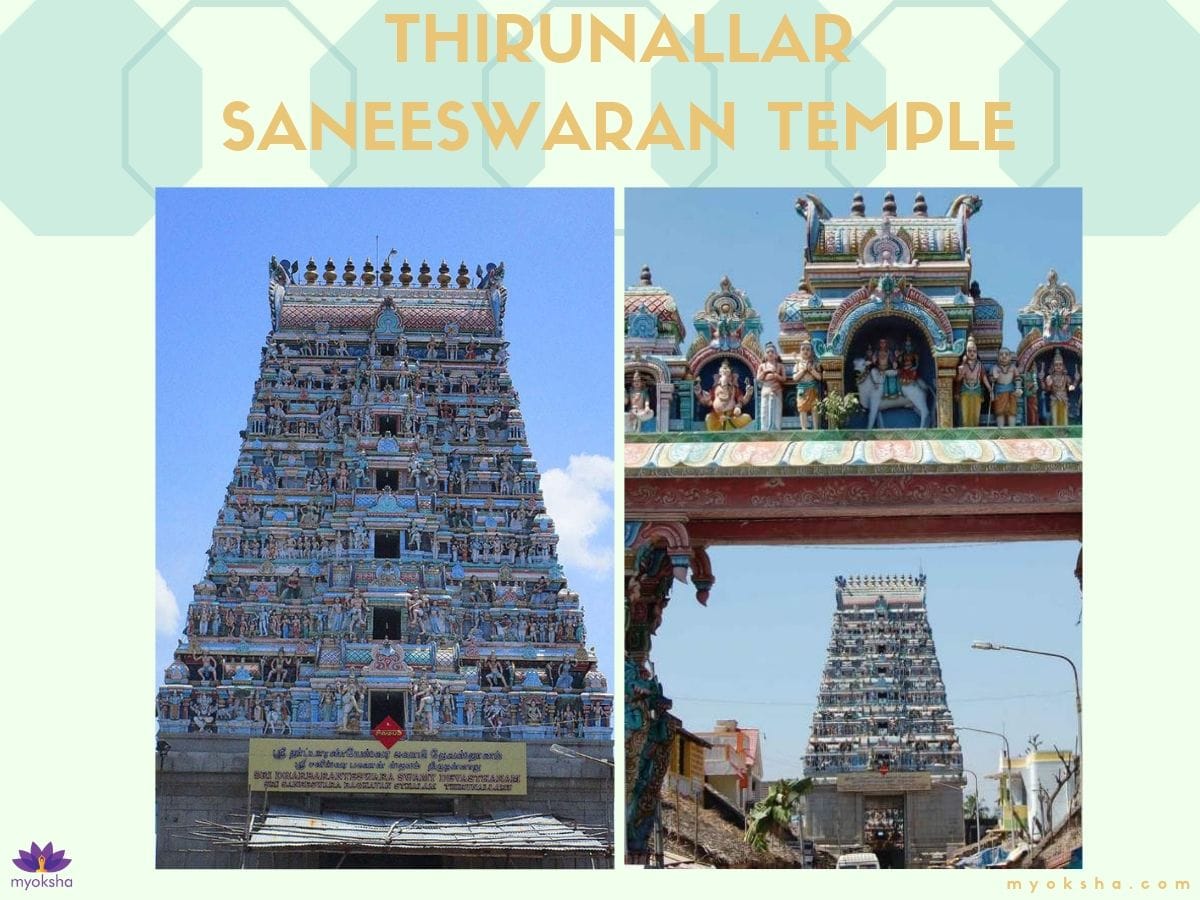 Planning to visit the Thirunallar Saneeswaran Temple? Have a look at our Navagraha Temple Tour Package.

What are the sevas and poojas at Thirunallar Saneeswaran Temple?

The devotees believe that they can get rid of their curses and spells of bad luck if they pray in this temple. Hence, pilgrims take a dip in the Nala Theertha and offer worship at the temple. The worship here also includes lighting holy lamps with til (gingelly) seeds and oil. After prayers, balls of cooked rice are offered to the Crow, the mount of Saniswara.

Apply Gingelly oil on the head before the bath an leave the clothes there. After dressing up, visit the nearby Kali Theertha Vinayakar shrine and offer prayers and break coconuts.

The significance of the Thirunallar Saneeswaran Temple is that offering prayers at this temple are believed to reduce the ill effects of Lord Shani and increase the positive effects. Also, for over thousand years Hindus have visited this temple and have found their misfortunes and bad luck to decrease as this is the only temple in the world where Lord Shani lost his power to Lord Shiva.

Saturn is popular as the Celestial Taskmaster and the Grand Teacher. Worshipping of Lord Shani helps people to develop a positive mindset even during the harshest of Shani periods. It will help us benefit from great difficulties, challenges and limitations. While it is true that offering worship here decreases the difficult effects and increases the positive effects of Saturn it does not completely eliminate the hardships we will face due to Shani Bhagawan.

Since the principal Deity Lord Dharbaranyeswara and his consort “Bhogamartha Poon Mulayal” have the power to offer benediction to the devotees, hundreds of people visit this temple daily. The other deities of the shrine are Swarna Vinayaka, Lord Subramaneswara Swamy and Thyagaraja. The image of Lord Saneeswara is there in a graceful standing pose in Niche on the left side of the Lord Dharbaranyeswara.

There is also an additional attraction in the shape of holy tanks which exists here possess healing powers literally and metaphorically. Also, the place was originally a forest of Dharba grass and it is stated that the Shiva Lingam even now has impressions left by the Dharba weeds within which it was situated.

According to the history of the Thirunallar temple, the famous King Nala and the Queen Damayanthi liked each other and got married. However, Devas wanted to marry the queen Damayanthi. So after this marriage, Devas got angry and jealous of Nala. Devas reached out Saneeswaran and asked him to help them out.

But after seeing the couple, he decided to make devas understand the Nala’s true love for his queen. Saneeswaran gave a lot of troubles to King Nala and finally, the King reached Thirunallaru. The King worshipped the Lord Dharpaneswara at this temple and hence the lord made him free from curses and doshas.

Nala stayed in place for some time and built the temple. After Nala got back his kingdom. The world Thirunallar is derived from two words – “Nala” means King Nala and “Aru” means “to heel” which means Nala’s place.

Another popular legend states that once, one of the wives of Surya Deva, Usha, couldn’t tolerate the heat of the sun. Hence, she converted her shadow as another woman in the name of “Saya Devi” and lived in that name. Saneeswaran was born to Saya Devi and Surya Deva.

Later when Surya Deva came to know this, he got angry with Usha and he didn’t accept Saneeswaran as part of his family. Saneeswaran then went to Kashi (Varanasi), worshipped Lord Viswanath (Shiva) and become part of one of the Navagrahas.

Some of the festivals celebrated at Thirunallar Temple are:

Here’s how to reach Thirunallar:

Where to stay at Thirunallar?

Some of the places where one can stay at Thirunallar are:

Where to eat at Thirunallar?

Some of the places where one can eat at Thirunallar are:

What are some temples near Thirunallar Temple?

Some of the temples near the Thirunallar Saneeswaran Temple are:

Yes, the Thirunallar Temple is open all 365 days of the year.

The entry to the Thirunallar Temple is free of cost.

The summers in Thirunallar starts from April and continue until June. The summers here can be very hot and dry. Temperatures during the daytime often go up to 45 º C.

In Thirunallar, winters start in October and continue until March. The temperatures during this time range from around 20 º C to 28 º C. The weather during this time is slightly warm but pleasant.

If you have any questions about The Thirunallar Saneeswaran Temple, please leave a comment below, and we will get back to you within one hour.