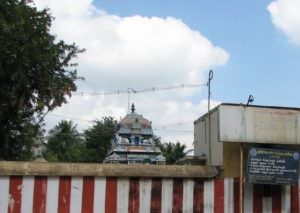 Kailasanathar Temple is one of the Navagraha temples and is at Thingaloor, Thanjavur district of Tamil Nadu.The presiding deity is Soma (moon). However, the main idol in the temple is that of “Kailasanathar” or Shiva. The main deities here are Kailasanathar (Lord Shiva) and Periyanayagi (Goddess Parvati).

Further, it is here that Chandran prayed to Lord Siva and got his blessings. Chandran is the Lord of Kadaga Rasi and he faces the South-East direction. Also, Thingaloor Temple has Dravidian architectural style, with a five tiered gopuram over the shrine which has carvings. The sanctum enshrines main deity, the glorious Lingam of Kailasanathan.

What is the history of Thingaloor?

According to history, Rajasimma Pallavan constructed Thingaloor around 7th century. This is built similar to the Dravidian architecture. “Appothiyadigal” one of the Nayanmar out of 63 Nayanmars is from this town Thingalur. Due to the affection towards the Lord Shiva he kept his sons name as “Mootha Thirunavukarasu” and Ilaya Thirunavukarasu.”

There was a snake in the backyard of his home and that bite his son. If he tells that his son is dead, Thirunavukarasar won’t eat the food at his home so he wanted to hide that sad news. When Thirunavukarasar came to know the news he carried the body of Appothiyadigal’s son and worshipped to the god. The son also came back alive is the story of this temple.

According to another legend the Devas and asuras were churning the Paarkadal using Mandhira Malai and the snake Vasuki. The asuras held the head portion of the snake and the Devas, the tail portion. When Lord Vishnu was distributing the Amrutham amongst the Devas, at the behest of Shukracharya, one of the asuras in the guise of a deva consumed the nectar.

Suryan and Chandran noticed this and complained to Lord Vishnu.  An angry Vishnu used his chakrayudham (discus) to cut the Asura into two and threw them away. The head joined with a snake’s body to become Rahu Bhagavan. The body portion kept growing because the Asura had consumed Amrutham.  This later joined with the head of a snake and became Kethu Bhagavan.

Now, Rahu and Ketu did not forgive Suryan and Chandran.  Rahu went after Chandran and started consuming him.  It is here that Chandran prayed to Lord Shiva and got his blessings.

Shiva blessed Chandran with the power to grow back to full size in 15 days after being consumed by Rahu.  That is why we have the waxing and waning moon.  Shiva also blessed Chandran by adorning Chandran on his forehead so that anyone who prays Shiva will have to pray Chandran.

What is the significance of the Thingaloor Temple?

Here’s the significance of Thingaloor Temple:

Here are the timings of Thingaloor Temple:

What are the festivals celebrated at Thingaloor Temple?

Some of the festivals celebrated at Thingaloor temple are:

What are the Poojas and Rituals at Thingaloor temple?

Puja at this temple is recommended for those in whose horoscope the position of Moon is weak. Chandra graha also controls the five senses of human life. Moon is the ruler of the mind and all the senses that it controls. Oblations to the Moon God at this temple helps keep all these factors on a balanced note.

How to Reach the Thingaloor Temple?

Here’s how to reach the Thingaloor Temple:

Where to stay near Thingaloor temple?

Some of the places to stay near the temple are:

Where to eat near Thingaloor Temple?

Tamilian’s staple diet is rice and most of their food consists of grains, lentils and vegetables. ‘Sadhams’ (rice dishes) with different flavours are their specialty. Spices give a distinctive taste to dishes. Tamil Nadu Food is very different from the food of other regions like Kerala, Andhra Pradesh and Karnataka. There are many restaurants near the temple that offers delicious food.

What are some temples near Thingaloor Temple?

Some of the temples near Thingaloor Temple are:

Brihadeeswarar Temple: Thanjavur Brihadeeswara temple is one of the most ancient temple, in the city of Thanjavur in Tamil Nadu, India. Also, a long prakaram surrounds the great temple (500 feet/250 feet), and the walls surrounding the prakaram again go back to Raja Raja Cholan’s period. The walls house long pillared corridors, which abound in murals, Shiva Lingams and Nandis.