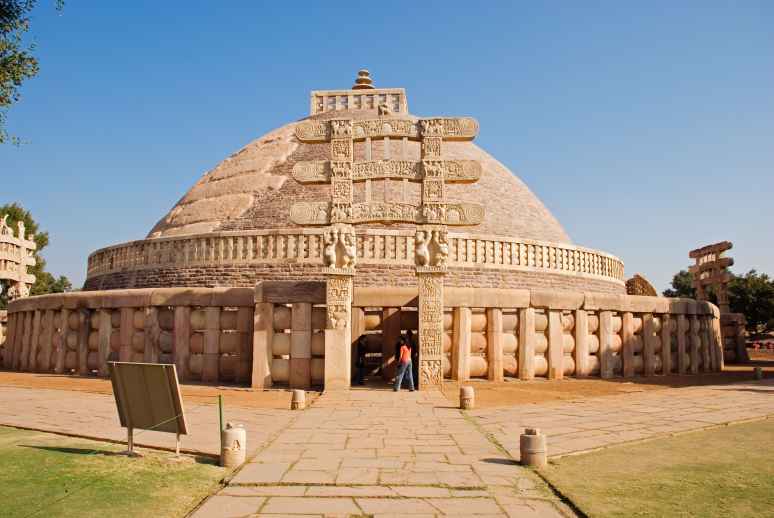 The Great Stupa is not only an important Buddhist monument but also one of the oldest stone structure in India. The stupa is a Sanskrit term that means ‘heap’. It was built by Emperor Ashoka in honor of Lord Buddha in 3rd century BCE. The Stupa was built during the Mauryan period. It is located in Sanchi, Madhya Pradesh. It has its listing in UNESCO’s world heritage sites. It is believed that this Stupa houses ashes of Buddha.

Originally the Stupa was a simple structure. However, it got destroyed in the 2nd century BCE. The Stupa reached its final form after repairing and enlarging it in the 1st century BCE. Currently, the Stupa is 54 feet high and 120 feet high.

The Great Stupa is located 46 km north-east of Bhopal, on the capital city of Madhya Pradesh, India. One can visit the Stupa from Sunrise to Sunset.  The Stupa remains open for visitors from 8 am to 5 pm.

What is the architecture of The Great Stupa?

Every Stupas has three identical features.

The other unique features of the Sanchi Stupa is:

All the elements are covered with relief sculpture that depicts the events of the Buddha’s life. There are Jataka stories -about the Buddha’s previous lives, scenes of early Buddhism, and auspicious symbols. The names of donors are also inscribed. The most notable is the ivory workers of  Vidisha.

What is the significance of The Great Stupa?

Stupas were made to remind the Buddhist practitioner of the Buddha and his teachings. These were made almost 2,500 years after Buddha’s death. The practice of building stupas spread with the Buddhist doctrine to Nepal and Tibet, Bhutan, Thailand, Burma, China and the United States where large Buddhist communities are centered.

Building Stupas has Karmic benefits for the Buddhists. Karma plays a key role in Buddhism and Hinduism. Karma means the energy generated by a person’s actions and the ethical consequences of those actions. A Buddhists believe that building a Stupa would help them be born in a good location and they will not suffer from extreme poverty.

The Four Noble Truths are:

Buddha means ‘The Enlightened One’. Buddhist practitioners seek the knowledge that the Buddha gained on his way to achieving Enlightenment.

What are the timings of The Great Stupa?

What are the entry fees of the Great Stupa?

The entry fees of the Great Stupa is:

What is the best time to visit The Great Stupa?

How to reach The Great Stupa?