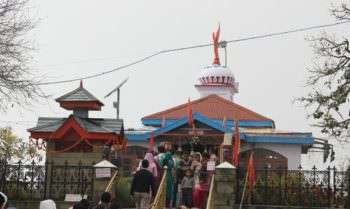 Tara Devi Temple Shimla is a place famous for its Devi Ma’s power and strength. Present on top of a hill, lush green surroundings engulf the temple, giving it a peaceful atmosphere. At the background also lie the snowy white Himalayas whose majestic view enthralls all.

What is the history of Tara Devi Temple Shimla?

According to the history of Tara Devi temple, once a king, Bhupendra Singh of the Sen Dynasty came here. He always wore an armlet that had the image of the goddess he worshipped encased in gold. One day while hunting the king had a vision of Tara ma along with Hanuman.

In it, they wanted the public to know her so that they can also worship her. So the king built her a shrine. Hence he built a temple and placed a wooden idol. Later after some generations, King Balbir Sen had a vision in which the Goddess wished that her idol should be installed at the top of a hill – Tarav Parvat. The Maharaja got a temple built at the top of the hill and got a beautiful idol made out of “Ashtadhatu”, a rare combination of eight elements.

What is the significance of Tara Devi Temple Shimla?

The significance of Tara Devi Temple is that it has tranquility and a sense of peace and relaxation. There is a “langar” at the temple where distribution of food amongst the people takes place on Sundays. There is a huge fair held at the temple during the Navratri and Ashthami.

What are the timings of Tara Devi Temple Shimla?

Here are the timings of Tara Devi Temple Shimla:

What are the festivals celebrated at Tara Devi Temple Shimla?

Tara Devi Temple celebrates festivals such as Shardiya Navaratras and Ashthami that take place during Dussehra, during which there are celebrations in honor of Goddess Tara.

Some of the temples near Tara Devi Temple are: