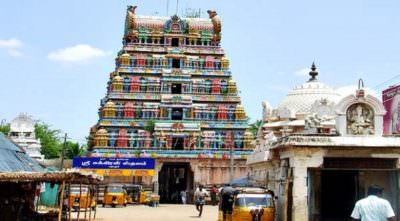 Agneeswarar Temple at Kanjanur is one of the nine Navagraha Temples in Tamil Nadu. It is associated with Lord Sukran (Planet Venus), the sixth of Navagraha planets. Lord Agneeswarar in this temple is there in the form of a Lingam, an infinite nature of Lord Shiva, which depicts Shukra.

Also, the Thayaar of Agneeswarar Temple is Goddess Karpagambigai (Goddess Parvati). The other deities of the temple are Lord Karpaga Vinayagar, Lord Dhakshinamoorthy, Lord Natarajar as well as Pullunda Nandhi. Moreover, the special feature of this temple is that Lord shiva blessed the sage Parasara Muni with His divine cosmic dance. Also, according to Shaivites, followers of Lord Shiva, Shukra is within the stomach of Lord Shiva.

What is the history of Kanjanur?

According to history of Kanjanur, Sukracharya was the son of Brigu Maharishi.  During a war between devas and asuras, Brigu Maharishi’s wife, was accidentally beheaded by Vishnu’s chakram (discus).  An angry Sukracharya cursed Vishnu.  As a result of the curse, He was born as Sudarsanar to Vasudeva, a Vaishnava Brahmin.

Sudarsanar was a staunch Shiva devotee and was popular as Haradatta Shivacharyar.  There are stories of the ordeals of Haradatta to prove his devotion for Shiva. Images pertaining to these are there in this temple and also in the Vishnu temple in the village. Haradatta used to spend much of his time meditating before the Dakshinamurthy.

The presiding deity Agneeswarar is the embodiment of Sukran. Sukran was the Guru of asuras. He had got the blessings from Lord Siva after severe penances. In the Vamana Avataram of Lord Vishnu, Vamana sought three footsteps of land from Mahabali, an asura king.

Realising Vamana to be no mere mortal, Sukrachariyar assumed the form of a bee and tried to block the flow of water from the kamandalam. Vamana picking up a pavithram blinds Sukracharya in one eye while trying to unclog the hole in the kamandalam.

Sukracharyar also has the prowess to bring the dead to living by virtue of his knowledge of Amirtha Sanjeevini Mantra. Using this mantra, in the asura war against the devas, he revived the slain asuras. Hence, this helped the asura army swell.

What is the significance of the Kanjanur Temple?

The significance of the Kanjanur Temple is that Lord Dakshinamurthy (Guru) is always seen with a demon being crushed under his feet. The demon signifies ignorance. It means that Dakshinamurthy leads us from ignorance to the knowledge of self. The image of Haradatta worshipping Dakshinamurthy is a unique feature.

Sukra endows those who pray to him will be blessed with wealth, pleasure, wife, prosperity as well as vehicles. He is alsothe next most beneficial planet after Guru. Moreover, if in a person’s horoscope, Sukra is well placed, then the person will enjoy pleasure, beautiful wife, wealth, house, vehicle, good food, fame, love, affection, marriage, siblings, governmental help, chance to govern the country/state and hold influential status.

What are the timings of Kanjanur Temple Temple?

Here are the timings of Kanjanur Temple:

What are the festivals celebrated at the Kanjanur Temple?

Some of the festivals celebrated at Kanjanur Temple are:

Mahasivaratri: Mahashivratri is celebrated in honour of Lord Shiva or Shankara. Priests wash the Shivalinga every three hours that day with cow’s milk, curd ,honey , cow ghee ,water. Women pray for the well being of their husbands and children, girls keep fast so that they get good and understanding husband.

Aadi Pooram: Aadi Pooram, also called as ‘Aandal Jayanti’ is a prime festival of Tamilians. This festival is for  Goddess Andal, an incarnation of Goddess Lakshmi. Aadi Pooram is a 10-day festival in all Lord Vishnu temples in the state of Tamil Nadu. Of these, the last day (10th day) is ‘Aadi Pooram’ and a grand marriage ceremony of Goddess Andal and Sri Ranganathaswamy takes place.

Arudara Darshan: Arudara Darshan occurs in the Tamil month of Margazhi (December – January). It is essentially a Shaivite festival and hence celebrates the cosmic dance of Lord Shiva in the Nataraja form. Women keep fast for husband’s well being while girls for a good marriage. Also, Ardra darshan is in early morning and devotees decorate the temple with flowers and diyas.

Navaratri: The festival of Navratri is marked by the celebrations of nine days. On each day the worship of one of the nine incarnations of the Goddess Shakti takes place. Chaitra Navratri occurs after Holi and during Chaitra Shukla Paksha. This starts from the first day and ends on the ninth day which is also Ram Navmi.

What are the poojas and Rituals of Kanjanur?

The poojas and rituals of Kanjanur are:

Here’s how to reach Kanjanur:

Where to stay in Kanjanur?

Some of the places where one can stay in Kanjanur are:

Where to eat in Kanjanur?

Some of the places where one can eat in Kanjanur are:

What are some temples near the Kanjanur Temple?

Some of the temples near the Kanjanur Temple are:

Suryanar Koil: Suryanar Temple is one of the Navagraha temples, which houses the Sun God (Surya god). further, to offer worship at Sooriyanar Temple, one has to reach the Rajagopuram (Main Entrance) and more towards North where Pushkarani of temple is present. One can also take bath in the tank or sprinkle holy water in the head as purification.

Sri Mahalinga Swami Temple: Mahalinga swamy temple has located at Thiruvidaimaruthur, Kumbakonam, Thanjavur district.The holy tree Marutham had found in this region like forest. Therefore, this place has known as Maruthur. This Temple was at the middle of the Maruthur so it was popular as Thiruvidaimaruthur. Appar, Sundarar and Thirugnana Sambandhar visited this temple. They sang many songs about Mahalinga Swamy.

Kalyanasundara Swamy Temple: It is believed that unmarried boy or girl will enter into wedlock if they propitiate the presiding deity Kalyanasundarar and his divine consort- Kokilambal. Parvathi Devi performed Tapas in this sthalam to marry Shiva Perumaan and finally married in this sthalam.