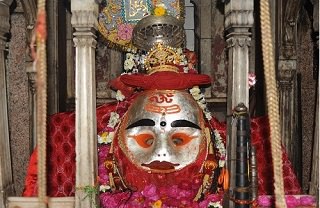 Kaal Bhairav Temple is counted among one of the most religious temples of Madhya Pradesh. It is located in the town of Adegaon and is a fierce manifestation of Lord Shiva linked with annihilation. Temples that are related to Bhairava are present within or near most Jyotirlinga temples. Out of the 12 Jyotirlingas in India, there are 5 Jyotirlingas in Maharashtra State (Get details here). There are also the sacred twelve shrines dedicated to Lord Shiva which can be found all across India. Additionally, Lord Shiva is counted among the important deity of the Hindu religion and his name is referred in many forms in the ancient Hindu mythology too.

There is a legend surrounding the evolution of Bhairava. People say that this can be traced back to the conversation between Lord Brahma and Lord Vishnu in ‘Shiv Maha-Puran’. When Vishnu asked Brahma about who can be the supreme creator of the Universe, the later considered himself and said that everybody should worship him.

This angered Lord Shiva who then took the form of Bhairava to punish Brahma. It is said that Lord Shiva beheaded one of the five heads of Lord Brahma and since then the later has four heads. Kala Bhairava in its form is seen carrying the severed head of Lord Brahma.

Lord Shiva later was guilty of the crime of killing a Brahmin and hence carried the disembodied skull for twelve years. He roamed as Bhikshatana, a mendicant until he was released from the sin.

It has been said that the nature of Bhairava is Tamasi which refers to the fact that he can take you from Tamas to Moksha. Pilgrims believe that he has the power to remove all of the human sufferings which is a serious pain that an individual feels in their body and mind. Apart from that, he also eradicates all difficult problems, anxieties, and greed.

With regard to the mythological concept, Kala Bhairava is said to live on the crematory grounds as he does not want to be associated with Maya, also known as the illusionary world. The Lord’s Sadhana yields fast results and he can be pleased with very little offerings. There are many poor and people who are suffering from various problems that come to seek solace at this wonderful temple.

Even people of all caste and creed believe that they will achieve Moksha fast when they worship Bhairava. It is always advisable to first ask your Guru for permission before you start any Sadhana.

The idol of Shri Kaal Bhairav Nath Swami Temple at Adegaon in Madhya Pradesh is often found with a frowning face coupled with angry eyes, sharp tiger’s teeth, and flaming hair. He is naked except for a garland made of skulls and a coiled snake around his neck.

The deity has four hands in which he carries a noose, trident, drum, and skull. Bhairava is often accompanied by a dog and is said to be originated in the Hindu legends. It is a popular and sacred place of worship for Hindus, Buddhists, and Jains alike.

Kaal Bhairav Temple is mostly visited by tourists from India and Nepal. In addition, this also marks as an important deity of the Newars. All the traditional settlements of Newars have at least a temple of Bhairava.

Traditionally, the temples of Kala Bhairav is the considered to be the supreme God in the rural villages of Karnataka, Maharashtra and Tamil Nadu, where he is referred to as ‘Bhaivara/Annadhani’ Vairavar.

In Karnataka, the Lord Bhairava temple stands as the supreme God for the community and is commonly referred to as ‘Gowdas.’ In the Gangadikara Gowda caste especially, he is considered the caretaker and punisher.

Bhairava himself has eight manifestations and is also called as the Ashta Bhairava. Devotees believe that a Sadhak should feed dogs Halwa Puri on every Saturday morning or evening to seek respite from all problems.

How to Reach Kaal Bhairav Temple

There might not be quite a lot of hotels in Adegaon but one can look for accommodation in and around this place. Madhya Pradesh offers an array of living options for its tourists. From dormitories to villas, you can look for your choice as per to your needs. The prices, however, will depend on the type of accommodation you choose. To enjoy all the modern amenities and fine luxury, there are five-star hotels that provide free pickup and drops apart from their complimentary breakfast option. The budget hotels, on the other hand, offer decent living with a plethora of fooding options.

The hotel staff also arranges for local sightseeing tours as per to the client’s request. And they also have internet connection for the visitors. Some hotels also have private balconies for clients to enjoy the beauty of nature. And for party lovers, one can opt for private lounges and hotel discs that remain open for quite late in the night. However, most of these hotels are available online and it is advised to book your hotel in advance to avoid any last-minute delay.

Madhya Pradesh is a home to food lovers visiting India. From Continental to Chinese to Indian, a traveler is sure to splurge on the variety of food that’s on offer here. For people who would like to taste the unique flavor of the complete Indian food, a Thali is recommended. It is a meal that consists of rice, dal, pickle, papad, vegetable curries, paneer and a sweet. This is available at a competitive price range and is available across various eating joints. For people looking for light food, the breakfast options are sure to tempt your taste buds. Poha, jalebi, samosa are some of the popular food that is loved by both natives and tourists here.

For people looking for fine dining options, there are many international cuisines that can be enjoyed at a moderate price too. From Thai to Mexican and Italian, the rich herbs and spices used in the preparation of the food pave the way for a delightful taste. A client can also customize one’s food habits and inform the chef in advance. Some of the eating joints also arrange for music and local bands for people to enjoy while relishing the unique taste of the food that is served here.