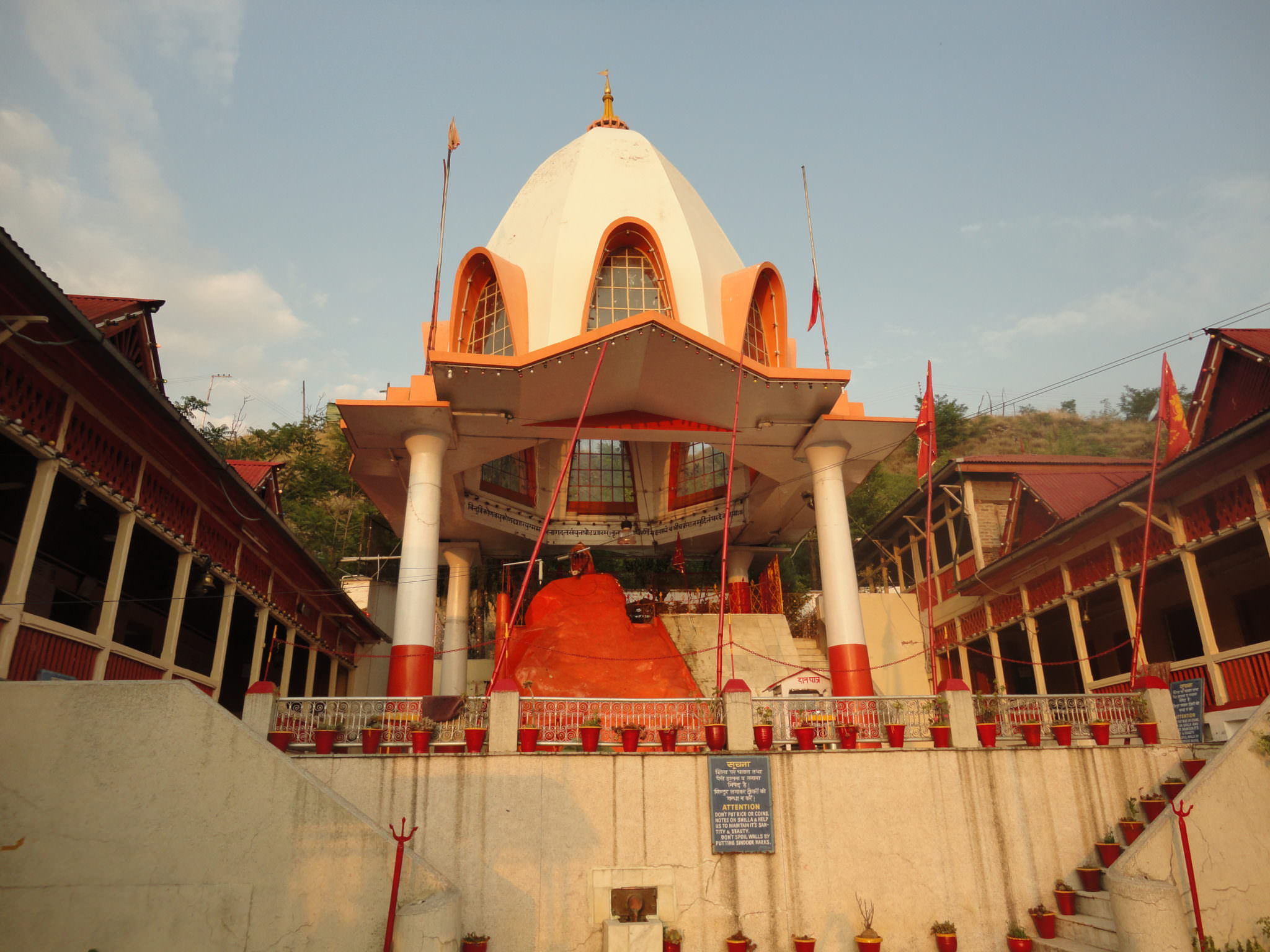 Hari Parbat or the Sharika Peeth is a popular temple in Srinagar and is commonly known as Shri Jagat Amba Sharika Bhagwati as well as the Maha Tripura Sundari. In the nearby regions, it is known as the Rajeshwari or the Hari Temple.

The temple is under the protection of the Indian Army and the devotees take special permission from the Army before visiting. This is the one of the ancient and holiest temples in the region of Kashmir and the temple is situated on a holy hill called Hari Parbat at the fringe of the Srinagar city. The presiding Goddess has 18 arms and is regarded as the reigning deity (‘isht’ Devi’) of the Srinagar city.

The Goddess has been exemplified by a Swyambhu Shrichakra (Mahamaha Shrichakra), also called the Maha Shri Yantra, which entails of the circular spiritual impressions and triangular patterns with a dot (Bindu) at the center and is extremely significant in terms of religious importance among the followers of the Goddess. The Hari Parbat hill is considered extremely holy due to the presence of the temples of Sharika Devi and is highly revered especially by the Kashmiri Pundits.

The entire Hari Parbat is considered as a sacred place in the region. There are the number of hallow temples on its all sides represents the different deities. Devotees undertake a circumambulation of the whole hill rock of the Hari Parbat in the form of Parikrama, which starts from the Lord Ganesha shrine located on the south western corner of Hari Parbat. Temples that fall on the Parikrama way are the Saptrishi Sathapna (Satresh), next pious place is the Sathapna of the Goddess Kali which is marked by small temple which comprises eight Bairvas called as Asht Bhairav. Further in Parikrama route is a vast stretch of open space known as Devi Angan, which was play field of the cosmic mother. The next on the parikrama is the Sthapana of the Hari that is represented by a rock located on north eastern face of hill rock.

The devotees at the temple offers “Teher Charvan” which are the traditional offering consisting of rice boiled with turmeric powder and mixed with oil, salt and cooked liver of goat that is given to the almighty Goddess on the occasion of Sharika Jayanti. This Jayanti is locally known as Chout Kharoun. Magh month is considered very distinct because of the Navratri (locally known as Navreh or the New Year day of Kashmiri Pundit).

Special prayers and worships are offered by devotees in this month, further; the next temple is Amber Koul and opposite to it lays the temple of Goddess Mahalaxmi Sthapana. Then Sathapna of Lord Vamdev is located on left side of Parikrama route. On the left side of the Vamdev temple is Sathopa temple. The next temple is located left down of Vamdev who is considered as the Divine consort of the Goddess Reghnya. Last spot of the parikrama is the small Hanuman temple which is located on the right side of foot hill. The circumambulation of the Hari Parbat ends at Kathi Darwaza.

There is a Guru Dwara of Guru Hargobind Singh in the vicinity of the Hari Parbat. There are two Darwaza; Sanghi and Kathi of old wall, that stretches to 5 kms and has a height of 10 meters. Kathi is the major entrance which has beautiful Persian inscriptions all around it.

This fort also has a temple of Sharika Goddess. There are Guru Chatti Padshahi and the Sixth Sikh guru’s shrine outside the southern gate of the fort. It is called as the Chatti Padshahi. The hill, which rises to 122 mts from the floor of the valley and is bounded by orchards of almond trees where people gather for picnics during months of summer and springs.

Significance of the Hari Parbat Temple

After visiting the Hari Parbat, King Chakreshwar is believed to have worshiped all the Gods and Goddesses of Hindu Mythology and had obtained all his worldly desires and wishes. Therefore, it is believed that Saints and Yogis achieved the ultimate on worshiping at this Sharika Peeth. Thus most people visit the temple to get all their wishes fulfilled.

The Chakrishwar Shrine is a popular place of worship in the temple. Goddess Sharika had look as if here at Hari Parbat as a ‘shila’ (small rock) which has augmented the religious implication of the hill top. Sharika Bhagwati’s birthday is celebrated on the Ashad Navami (Har Navum) which is an imperative occasion in the temple. Other propitious days when worshiping prayers are offered at the Sharika Temple Peeth are the Phagun Krishna Ashtami (Hora Ashtami), Ashad Shukla Saptami, Ashtami and Navami (Har Satum, Har Aatham and Har Navum).

The temple is devoted to Goddess and hence the customs are the same that are offered to the Goddess in the region. The Kashmiri Pandits implore here with special chants and mantras and the poojas last as long as the implication of the occasion. During Navratri, special poojas are performed here and the Goddess is offered special prasadam and is decorated with all beautiful clothes. There are many fairs and procession carried out in and near the temple during this time of the year.

How to Reach By Rail, Road and Air

Tourists have to take special permission from the army department to visit this temple. Jammu is a major city of India and is well connected to all parts of the country by trains, airways and road.  Following are the major roadways, railways and airways of the city:

By Bus: Hari Parbat is easy to access by roadways. There are several private bus service providers who run deluxe bus packages from nearby cities to Srinagar and are connected to Chandigarh and Jammu etc. The package tours expense around Rs. 4/- to Rs. 5/- per km.

By Rail: Jammu is the nearby railway station to Srinagar, found at 290 kms away. The Railway station of Jammu is well linked to different main cities of the country by rail services. There are direct train services available from Chennai, Delhi, Trivandrum and Bangalore.

By Air: The Srinagar airport connected to major cities of the country. There are effective flights between Srinagar and Delhi, Chandigarh, Mumbai and Shimla. The frequency is generally once or two times a day which is standard amongst all the airlines.

Srinagar is a major Indian city and thus has many 3-Star, 4-Star, 5-Star hotels as well as many luxurious resorts like Hotel Akbar, the Lalit Grand Palace and Vivanta Dal View by Taj. The city has a major attraction in the form of the houseboats that are dwelled by many tourists and many inns, cottages and private residences are also present in the city.

Srinagar is a wonderful city poised with natural beauty and nestled among mountains. The city is situated on the banks of the Jhelum and has many diverse temples of great architectural grandeur. The city has beautiful gardens and lakes. Some of the major tourist attractions of Srinagar are the Dal Lake, Shalimar Bagh, Nishat Bag and Jami Masjid.

The Hari Parbat Temple of Srinagar has been a significant temple and carries special importance among the Kashmiri Brahmins. The temple is dedicated to the presiding deity is visited by many people and the city of Srinagar is also an important destination for many people and is visited by many tourists. The temple is a place with immense natural beauty in and around the temple and thus the place is worth a visit.