Sri Harmandir Sahib, also know as the Golden Temple in Amritsar is the holiest shrine of the Sikh religion. Also known as the Shri Darbar Sahib, it is in the center of the old part of Amritsar.It not only a central religious place of the Sikhs, but also a symbol of human brotherhood and equality. Everybody, irrespective of cast, creed or race can seek spiritual solace and religious fulfilment without any hindrance.The Buddha is known to have spent time at this place in contemplation. Two thousand years after Buddha’s time, another philosopher-saint came to live and meditate by the peaceful lake. This was Guru Nanak (1469-1539), the founder of the Sikh religion. From the early 1600s to the mid 1700s the sixth through tenth Sikh Gurus were constantly involved in defending both their religion and their temple against Mughal armies. From 1767 onwards, the Sikhs became strong enough militarily to repulse invaders. Peace returned to the Hari Mandir.

The focus of attention is the tank that surrounds the gleaming central shrine which is the Amrit Sarovar, from which Amritsar takes its name, excavated by the fourth guru Ram Das in 1577. Golden Temple itself is a mesmerising blend of Hindu and Islamic architectural styles, with an elegant marble lower level adorned with flower and animal motifs in pietra dura work as seen on the Taj Mahal. There is a shimmering second level, covered with gold panels, and topped by a dome gilded with 750 Kg of gold. With the first light of dawn, the reflection of the temple in the tank gives an ethereal atmosphere to the complex. The Golden Dome is supposed to represent an inverted lotus flower, pointing back to earth to symbolize the Sikh’s concern with the problems of this world. 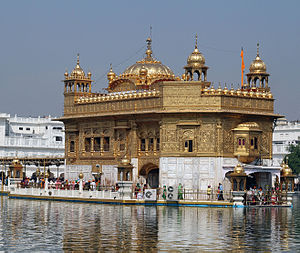 Significance of the Golden Temple

The morning Kirtan begins in the sanctum of the Harimandir Sahib in the early morning with the singing of the lengthy composition Asa di Var, which is interrupted by the arrival of a procession from the Akal Takhat of the Sri Guru Granth Sahib being carried on a palanquin on the shoulders of Sevadars (volunteers).

The holy Granth is then ceremoniously opened and a Hukam (command) is taken by opening the text at random and reading the first composition on the open page. The praises sung in honour of the Gurus by court poets and others, and his first discourse of the day in the shrine.

The Guru Granth Sahib then remains on its throne in the sanctum until the early evening, when it is again taken in procession on a palanquin to the Akal Takhat for its traditional night-time rest.

Wearing outfits like shorts, lungis, middies or Bermudas, Consuming tobacco and chewing gums or liquor. Carrying camera, mobile phones and electronics and any inflammable items. One needs to cover the head with a scarf and taking off the shoes before going there.

Festivals celebrated at the Golden Temple

Baisakhi: Baisakhi celebrations are particularly marked at the Golden Temple or Sri Harimandir Sahib Gurdwara at Amritsar – the most sacred centres for Sikh community. For it was here at the Anandpur Sahib, the famous Golden Temple that the tenth Sikh Guru, Guru Gobind Singh laid the foundation of Khalsa Panth on a Baisakhi Day in 1699. Sikhs from around the world strive to visit their revered shrine to participate in the grand Baisakhi celebrations organized here.

Sangrand: It marks the beginning of a new month. At the Gurudwara, portions of Bara Maha, Song of the 12 Months are read.

Hola Mohalla: Hola Mohalla falls on the Holi Festival of the Hindus. Military exercises swordsmanship and horse riding like are displayed by Nihang Singhs. Various competitions of Poetry and Music are held to celebrate this day.

By Air: Sri Guru Ram Das International Airport  is about 13 km and a 18-20 minutes drive from the city center. Most flights are to Delhi, an hour away, but there are an increasing number of international connections: British Midland International (bmi) flies to London via Almaty, Jet flies to London, Air India flies to Toronto via London and Air Slovakia flies to Bergamo, Barcelona and Birmingham via Bratislava. There are also surprising numbers of flights to Central Asia.

By Rail: Amritsar is well connected by rail with Delhi, Calcutta, Bombay, Varanasi, Wagah (29 Kms,Attari Border) and some other places in India. If you are traveling from Delhi, Shatabdi Express will be the best option. The journey takes around 6 hours and the train passes via Ambala, Jalandhar, Ludhiana, Phagwada and Beas. Amritsar is connected with Lahore (Pakistan) by the Samjhauta Express. The railway station in Amritsar is centrally located; of hardly 15-minutes drive from the Golden Temple.

By Road:  One can reach Amritsar from most of the northern states in just a day’s time. Pathankot is about two and half hours drive from Amritsar. Grand Trunk Karnal Road connects Delhi to Amritsar. Regular buses are available from Delhi I.S.B.T Delhi to Amritsar. There are daily direct buses operating to Jammu, Katra, Chandigarh, and Dharamshala as well, from the city. Thus, Amritsar is adequately connected by road to both the places within Punjab as well as outside the state.

There are seven Niwas Asthans (inns) which provide lodging facilities for pilgrims, maintained by Sri Harimandir Sahib authorities. The reception counters work round the clock to attend to the devotees. The serai accommodation at Golden Temple is really good. There are many serai near Golden temple . Also they have a NRI serai for foreigners.

Sri Guru Ram Das Niwas is a free hostel for pilgrims and visitors built by the SPGC. This project was initiated by the Local Gurdwara Prabhandak Committee Amritsar and its foundation stone was laid by Sant Sadhu Singh ji of Patiala on 17th January 1931. There are 228 rooms and 18 large halls. The literature stays that the Niwas supplies free bedding,costs,lights and fans. Stays are mostly restricted to 3 days.

This building comprises the offices of the different departments of SGPC and also lodging facilities for pilgrims.Guru Nanak Niwas contains 68 rooms, 22 of the rooms have bathrooms attached.

This building is situated at the entrance to the main sarai area. Guru Arjan Dev Niwas has 19 air conditioned, and 72 non AC rooms. Rooms are available from Rs. 50 per day per room.

This stands exactly opposite to Guru Hargobind Niwas. It also houses Internet Department of SGPC. Mata Ganga Ji Niwas has 103 double bed rooms. In addition there are 14 hostel style halls. Rooms are available from Rs. 50 per day per room.

This building is situated behind Guru Arjan Dev Niwas. It contains 49 rooms, out of which 5 rooms with 25 beds for NRIs.

In Amritsar, the Sikh gather in a Golden Temple to serve 100,000 meals every single day of the year in a kitchen that never closes.The langar, or community kitchen, found in this temple is the largest free kitchen on the planet. In the Golden Temple an average of 75,000 devotees or tourists take langar in the Community Kitchen daily; but the number becomes almost double on special occasions. Golden Temple kitchen daily serves 2,000 kilos of flour, 1,500 kilos of rice, 13,000 kilos of lentils, and up to 2,000 kilos of vegetables.

Durgiana Temple: Shri Durgiana Temple is one of main pilgrim places in Amritsar. The temple, also called Shree Durgiana Tirath or Sitla Mandir, is situated outside the Lohgarh Gate in Amritsar. Build in 16th century; the temple closely resembles Golden Temple, in style and architecture.The temple complex encloses the seats of Lord Hanuman, Mata Shitla, along with Lakshmi Narain.

Ram Tirath: Shri Ram Tirth Temple , dedicated to Lord Ram is situated 11 kms west of Amritsar on Amritsar Lopoke road. The temple dates back to the period of Ramayana and the place is famous for the ashram of sage Valmiki . It is the place where the sage gave shelter to Sita , wife of Rama when she was abandoned after the Lanka Victory. It is also said that sage Valmiki, the writer of the Ramayana started writing the great Epic here.

Akal Takht: Akal Takht is the primary seat of Sikh religious authority and central altar for Sikh political assembly.  It is the highest temporal seat of Sikhism was founded by the Sixth Sikh master Guru Har Gobind Sahib Ji in the year 1609, assisted by Baba Budha Ji and Bhai Gurdas. Guru named it Akal Takhat.

Tarn Taran: The District of Taran Taran is situated in Punjab State of Northwestern India. It is 5059 Sq. Km in area. It is believed that the Sarovar (pond) located in this Gurudwara is the largest among all the Sikh Shrines. Tarn Taran is counted among the most popular Sikh pilgrimage sites in India and thronged by the devotees.