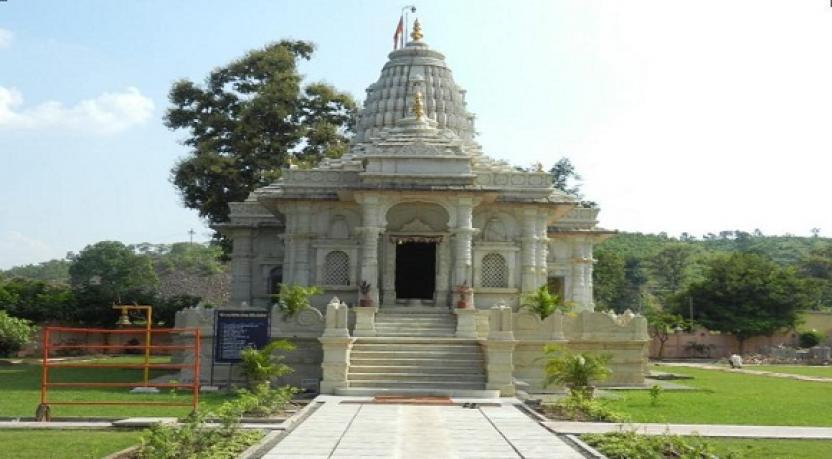 Indore is an important pilgrimage destination for travelers visiting the sub-continent. There are many famous temples in and around this wonderful city and it sees a large crowd thronging the airport and the busy railway stations all throughout the year. Having a tropical climate, the summers can be as high as 44 degree Celsius and winter temperature can drop down to 14 degree Celsius. However, it receives a good amount of rainfall during the monsoons. One can visit this beautiful and natural place ideally between the months of October to March. The Gajanan Maharaj temple is located at Paliwal Nagar in Indore is considered to be a holy place for the devotees of the Sadguru Shri Gajanan Maharaj.  It stands supreme among the pilgrimage centers in the state of Madhya Pradesh and the shrine is situated only at a distance of 15 minutes from the heart of Indore. There is a belief among the natives that Gajanan Maharaj possessed various spiritual and supernatural powers. He was also aware of the ultimate truth of life. This pious place of worship in Indore is very popular and innumerable pilgrims seek blessings and devotion from states like Maharashtra etc.

Significance of the Gajanan Maharaj

Festivals celebrated at the Gajanan Maharaj

Poojas and Rituals at Gajanan Maharaj

Shri Gajanan Maharaj Sansthan, Shegaon has a separate and systematic arrangement for providing accommodation to thousands of devotees coming from various nook and corner of the country for Maharaj’s darshan.

In order to extend this facility to the devotees, the Sansthan has four Bhakta Niwas (Two of them in Mandir premises and the other four near parking which is adjoining to Hattikhana, i.e. place of rest of Sansthan’s elephant). Pilgrims can find a double bed and deluxe rooms available with all the modern facilities as per the requirement. The Sansthan has a unique system for providing lodging facilities on a ‘first come first serve’ basis. One can also make way for reserving the rooms in advance. An individual needs to furnish a validated ID proof while applying for the room.

There are other hotels and lodging accommodation available for tourists to choose from. One can choose as per to their taste and ambiance.

For pilgrims and tourists looking for the variety in food, Indore is the right place to visit. It serves impeccable dishes at an attractive price to its visitors. So whether you are vegetarian or nonvegetarian, there are a plethora of options to choose from. For example, one can opt for poha, jalebi, samosa, kachori or dal bafla for breakfast. For lunch and dinner, you can opt for either Indian or Chinese cuisines. The Indian meal or Thali as it is popularly called is a balanced diet comprising of roti, daal, rice, sabzi, pickle, papad and curd.

Additionally, there are many international restaurants and eating joints that provide customized food options as well. For people who have a sweet tooth, there are multiple dishes to relish the unique taste of Indore. Try gorging on Gajak, Garadu and Moong Halwa to satisfy your appetite. Visitors are often found to carry some namkeens from Indore which reminds them of some wonderful memories spent here.