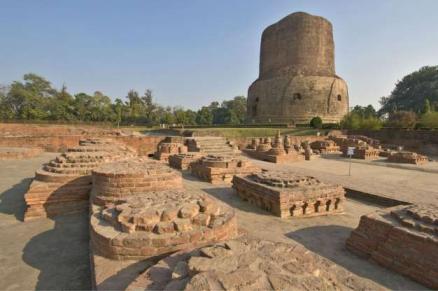 Dhamek Stupa is one of the most famous and Buddhist stupas. It is located in Sarnath near Varanasi in Uttar Pradesh, India. Dhamek Stupa is one of the most visited Buddhist structures in the world.  This Stupa was originally built in 249 BCE, during the reign of King of the Maurya Dynasty, Ashoka. After that, this massive and prominent structure has gone through several expansions and additions. Dhamek Stupa lies inside the Deer Park in Sarnath.

The Dhamek Stupa marks the spot where the Buddha after attaining enlightenment, gave the first sermon to his first five Brahmin disciples. He revealed his Eightfold Path leading to nirvana.

What is the history of Dhamek Stupa?

The mortal remains of Buddha were distributed and buried under 8 mounds after his cremation. The embers and urn were placed under 2 other mounds. Therefore 10 such monuments consisted of the relics of Lord Buddha.

Emperor Ashoka of the Maurya Dynasty reigned over almost the entire Indian subcontinent from c. 268 to 232 BCE. He built several Stupas that consisted the relics of Lord Buddha. and His disciples across India in his pursuit to spread Buddhism. In 249 BCE he commissioned to build the Dhamek Stupa in Sarnath. The Stupa was later reconstructed in 500 CE. It was around that time that he built the Dhamek Stupa and several other monuments to commemorate his pilgrimage at Sarnath.

Dhamek stupa boasts of a distinct architectural pattern. The stupa bears special significance for devout Buddhist. This is because it marks the ‘seat of the holy Buddha’ as he proclaimed his faith.

What is the architecture of the Stupa?

The Dhamek Stupa is a cylindrical tower. t is 43.6 m high and 28 m in diameter. The Stupa is built with red bricks and stone. The lower part being entirely covered with beautifully carved stones. These are chiseled with exquisite floral carvings of the Gupta period. The borders of the stupa are delicately carved with figures of humans and birds.

The base of the Stupa dates back to the Ashokan period. The panels of Dhamek Stupa Sarnath also consist of  ‘Swastikas’.  The structure of the stupa was expanded and enlarged almost12 times in the course of history.

How to reach the Dhamek Stupa?

Air:  Varanasi airport is well connected with all the major cities of the country

Road: Varanasi is connected to all major cities by road.

What is the visiting hours of the Stupa?

What is the entry fees of the Stupa?

The entry fees of the Stupa is: