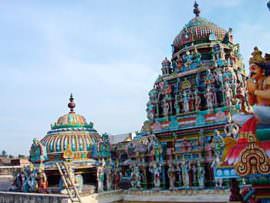 The Jagatpita Brahma Mandir popularly known as the Brahma Temple Pushkar is a famous Hindu temple that is situated in the holy town of Pushkar in Rajasthan. The temple is the most prominent of the few temples dedicated to Lord Brahma and is legendary in many ways.

The sacred Pushkar Lake is situated close to the temple. This temple is about 2000 years old and is built of marble and stone stabs. The temple holds the images of the creator Lord Brahma along with his second major consort Goddess Gayatri.

Pushkar is also famous due to the popular Pushkar camel fair that is held every year in the city on the occasion of Kartik Poornima (full moon day). This is the time when camel trading is practiced and many people decorate their camel to make them participate in beauty contests held popularly here.

Mythology suggests that when Lord Brahma saw the demon Vajranabha who was trying to kill his children and was harassing people, he slew the demon with his the lotus-flower weapon and when the lotus petals fell, they landed on three places that were turned to three lakes: the Jyeshta Pushkar, the Madhya Pushkar Lake, and Kanishta Pushkar Lake.

When Lord Brahma came to the earth, he named this place as Pushkar which is an amalgamation of the words Push (flower) and Kar (hands). Thus, since the place became the most significant place for the followers of Lord Brahma.

Lord Brahma wanted to perform a Yagya at the Pushkar Lake and to peacefully perform this yagya without any interruptions from the demons who wanted to stop the yagya, he created hills around Pushkar and positioned the Gods to protect this yagya from any evil forces. Since his wife Savitri could not be around during the yagya, Brahma married a Gurjar girl named Gayatri and then completed his yagya with Gayatri holding the Amrit pot on her head.

When Savitri arrived and found Gayatri sitting next to Lord Brahma she cursed Lord Brahma that he will never be worshiped and later reduced this curse then permitting his worship only in Pushkar. Thus, Brahma Temple Pushkar is the only temple that is dedicated to Brahma and holds a special place in Hinduism and among the holy men of the country.

Although the Pushkar temple is not the only Brahma temple in the country still it is one of the very few existing temples that are dedicated to Lord Brahma in India. It is also the most prominent temple that is dedicated to Brahma.

Scriptures have identified the Pushkar Lake along with the Brahma temple as one of the prominent ten religious places in the world and it is also one of the five sacred pilgrimages for the Hindus, in India. Thus, Pushkar has become synonymous with pilgrimages and India and many holy sages have made it their prime abode.

Brahma Temple Pushkar is also home to many other smaller temples which have their own priests and many religious activities also take place in these smaller temples. They do not allow the visitors to take the belongings inside and they need to be deposited in a safe locker outside the temple gates.

The holy Brahma Temple Pushkar is dedicated to Lord Brahma and since Kartik Poornima is a major festival that is dedicated to Lord Brahma thus a major religious get together and a fair is held at Pushkar during this time. During this festival time, a large number of holy men and pilgrims visit this temple and set up camps to stay for the 5-day long fest.

They generally indulge in the ritual of bathing in the sacred Pushkar Lake after which they visit the Brahm temple and pray there. The temple is governed by Sanyasi sect of the priesthood.

The Pushkar fair is a major attraction for the devotees as well as the foreign tourists during this time and the whole city gears up for the fair and the festival months in advance. Many camps, hotels, and eating points throve upon this time and thus the fair also promotes tourism in Pushkar.

Also, there are many major markets and street markets set up during this time for the thousands of people who visit the fair. The city ensures that the visitors are accommodated properly during this time of the year.

Brahma Temple Pushkar is popular among the pilgrims and is also visited by the holy men and the sages who after taking a ceremonial sacred bath in the holy Pushkar Lake visit the Brahma temple where they worship his consort Gayatri and then visit the other temples.

As the temple opens for worship between morning 6:30 am and 8:30 pm during winter and from 6:00 am to 9:00 pm during summer, with an afternoon interval between 1:30 pm to 3:00 pm, three aratis are held: Sandhyaarati after sunset, Ratri Shayanarati about 5 hours after sunset and Mangalaarati which is held in the morning 2 hours before sunrise.

The holy priests at the Brahma temple follow strict religious practices and House-holders are never allowed to enter sanctum sanctorum to worship the deity. Only ascetics can perform puja to the deity. And the priests of this temple belong to the Parashargotra lineage. On Kartik Poornima every year, a religious festival is held in the honor of Lord Brahma. A fair is held when thousands of pilgrims bathe in the holy Pushkar Lake and various rites are held at this temple during the fair. The famous Pushkar Camel Fair is also held at this time.

How to reach Brahma Temple Pushkar

By Road– Can be reached from Ajmer in 30 minutes and Ajmer is well connected to all cities in the country.

By Rail – Ajmer is the nearby railway station from Pushkar at a distance of just 11kms and this railway station is connected to all major towns of the country through direct as well as indirect trains.

By Air – The nearest airport from Pushkar is Sanganer Airport at Jaipur at the distance of 146 km (91 mi). Jaipur is well connected with all the major cities in India. Ajmer can be easily reached from Jaipur through road as well as railways.

Thus, Ajmer and Pushkar can be easily reached from any major Indian city without making much change in means of transport.

Owing to Pushkar’s star status among backpackers, there are far more budget options than mid-range though many have a selection of mid range priced rooms. At the time of the camel fair, prices multiply up to three-fold or more and it’s essential to book several weeks ahead. People who visit Pushkar also stay in Ajmer which is a major town and extremely close to Pushkar and have many 3-star as well as 5-star hotels, motels, boarding houses as well as guest houses.

There are many restaurants, dhabas, and cafes in Pushkar and the food options are vegetarian as well as non-vegetarian. Some famous eating places are Honey & Spice , Cafe Nature’s Blessing , The Sixth Sense , The Laughing Buddha Cafe, Ombaba Restaurant, Cafe Lake View, Nirvana cafe and pizzeria, Tyagi’s Rooftop Restaurant , Hard Rock,  Narayan, Honey dew café, Budha Café, Tibetan Kitchen and many other restaurants that are also fit for the NRI visitors.

Pushkar is extremely close to another major pilgrimage of India- Ajmer. Ajmer city holds the Ajmer Sharif Dargah that holds special importance for both the Hindus and the Muslims of the country. The dargah is the resting place of the Sufi saint Khwaja Moinuddin Chisty who was a major promoter of Sufism in India. There are many temples dedicated to Hinduism and Jainism in Ajmer. There are also major facilities in Ajmer for people visiting Pushkar in terms of transport and stay.

Pushkar has always been held as a town of great importance due to the Hindu scriptures and this has made it a popular tourist as well as the religious destination in the country. The town holds significance in terms of history as well as mythology. The priests and yogis who reside here have made this place extremely spiritual and this can be felt in the air of the town. Most Hindu tourists who visit Pushkar take back a lot in term of spiritualism and thus keep coming back to experience the utmost peace and bliss.