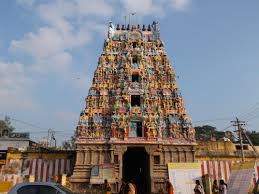 The ancient temple of Dakshinamurthy temple is present in a tiny village of Alangudi in Thiruvarur district of Tamil Nadu. It is also popular as the Arulmigu Abathsagayeswarar temple. Here Lord Shiva is the main deity.  There is a separate sanctum for the special deity Sri Dakshinamurthi.

Lord Guru or Lord Dakshinamurthy is one of the “Navagrahas” and refers to the planet Jupiter. The Balipeeta for Nandi has a covering of copper plates. Also, devotees believe that ‘Amudogar’, devotee of Lord Shiva, constructed this temple. He was also the minister of the King Masukuntha Chakravarti. Further, in the inner corridor of the temple the shrines of Lord Ganesh, Murugan, Lakshmi, Sapthalingas, Kasi Viswanathar, Visalakshi and Sage Agasthya are present.

What is the history of Alangudi?

As per history of Alangudi, Devas and Asuras tried to churn the Cosmic Ocean to obtain Amrita. It was the nectar of immortal life. By the suggestion of Vishnu, the gods (devas) and demons (Asuras) churn the primeval ocean in order to obtain Amrita which will guarantee them immortality.

To churn the ocean they used the Serpent King, Vasuki, for their churning-string. For a churning pole they use Mount Mandara placed on the back of a Great Tortoise. It was the Kurma Avatar of Vishnu. As the gods and demons churned the sea, a terrible poison issued out of the sea which enveloped the universe.

The devas and asuras approach Shiva who took the poison into his throat and swallowed it. As Lord Shiva saved the world from the poison the Lord here is popular as ‘Abath Sagayeswarar’. This place also famous as Alangudi ( poison means Alam in tamil).

When the devas were churning the paarkadal for nectar, poisonous fumes from the snake Vasuki disturbed them and hence, they prayed to Lord Siva for deliverance. Lord Siva consumed the deadly poison (Ala Visham), thus giving rise to the name Alangudi

What is the significance of the Alangudi Temple?

Here’s the significance of Alangudi Temple:

What are the timings of Alangudi Temple Temple?

Here are the timings of Alangudi Temple:

What are the festivals celebrated at the Alangudi Temple?

Some of the festivals celebrated at the Alangudi Temple are:

What are the Poojas and Rituals of Alangudi?

The poojas and rituals of Alangudi are:

Here’s how to reach Alangudi:

What are some places to stay in  Alangudi?

Some of the places where one can stay in Alangudi are:

Where to eat in Alangudi?

Some places where one can eat in Alangudi are:

What are some temples near the Alangudi temple?

Some of the temples near Alangudi Temple are:

Sri Perungaraiyadi Meenda Ayyanar: Sri Perungaraiyadi Meenda Ayyanar Temple is one of the famous temples in Pudukkottai District, Tamil Nadu. Moreover, the temple’s history dates back to 18th century. The temple is in the bank of Villuni River. As per the researchers, there used to be a big Elephant idol facing opposite to the Horse idol in this Temple

Vasisteshwaran Temple: The temple dates from the 12th century AD and was built by the Cholas. Also, Maharshi Vasishta worshipped Jupiter as Raja Guru in this temple; hence the place has Guru importance. The Goddess here is also popular as Sugantha Kunthalambigai as a girl by name Sugantha Kunthala brought husband back to life after worshipping Ulaganayaki.