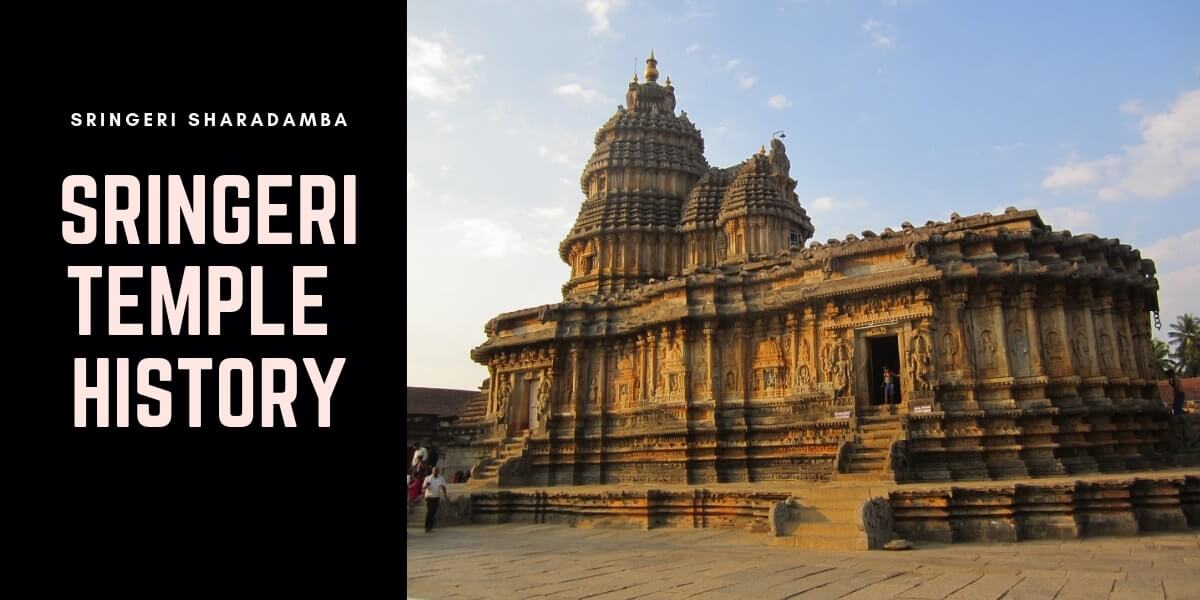 What is the history of Sringeri Temple?

According to the history of the Sringeri Temple, Sri Sharadamba is the presiding deity of the town of Sringeri. The original sringeri temple was small and a sandalwood idol of Goddess Sharada was there above a Sri Chakra. Moreover, Adi Shankaracharya carved the Sri Chakra.

Sri Sacchidananda Shivabhinava Narasimha Bharati raised the present structure in granite with polished granite walls around the sanctum and Sri Chandrasekhara Bharati consecrated the new temple in May 1916.

According to the history of the sringeri temple, the 32nd Acharya of the Peetham, Jagadguru Sri Vriddha Narasimha Bharati Mahaswamiji had a vision of the Ganapati when he was contemplating on resolving and issue in the mutt affairs. He offered prayers to the image of Lord Ganapati carved on the Torana of the door nearby. Hence, this resolved the problem immediately. Since then, the Ganapati became famous as Torana Ganapati.

According to sources, the Muslim invasion under Malik Kafur, destroyed the original idol made of sandalwood. During the Vijayanagara period, a gold statue of Sharadamba in a sitting position was there.

In the 14th century, the Vijayanagara empire gave royal patronage. The King granted the Peetham the rights over the secular administration of the land.

As per the story, a noted scholar named Mandanmisra was famous for his debating skills and no one could win the debate with him. Seeing this, Goddess Saraswati descended on Earth as Upaya Bharathi and organized a debate between Shankaracharya and Mandanmisra.

The condition was that if Shankaracharya loses the debate, he would marry and have a family and if Mandanmisra loses, he will take up Asceticism. Upaya Bharathi handed each of them a garland and said that whichever garland dries up first, that person will lose the debate.

The debate lasted for 17 days and eventually Mandanmisra ‘s garland dried first and he lost the debate. Upaya Bharathi challenged Shankaracharya on a debate on marital life. After a time gap of one month, Shankaracharya won the debate. He begged Upaya Bharathi to follow him to a place he goes to frequently. She obliged on the condition that he will not turn back and look at her otherwise she will stop.

Mandanmisra was a disciple of Shankaracharya and he started the journey with Upaya Bharathi. On reaching the village of Sringeri, an unusual sight on the banks of River Tunga surprised him. A cobra was spreading out its hood over a frog in labor pains, to give it a shadow from the scorching mid-day sun. The sound of the anklets stopped and he turned back to look. Shankaracharya immediately installed the Sri Chakra on a rock there and installed Devi with the name Sharada.

The Goddess appeared before him  and said that this would become famous as the Sharada Peetham and that she would stay at the Peetam to grace the devotees.  Mandanamisra, now Sureshwara became the first pontiff of Sringeri Sharada Peetam.

What is the significance of Sringeri Temple?

The significance of Sringeri Temple is that Sri Adi Shankaracharya in 8th century AD founded Sringeri Sharada Peetham which is the southern Advaita Vedanta Matt. He had previously established three other Matts – Jyotirmath in the North, Puri in the East and Dwarka in the West.

Sri Adi Shankaracharya installed the idol of Goddess Sharadamba on the banks of the Tunga river.

Devotees believe that Goddess Sharadambika is the incarnation of Goddess Saraswati, who came to Earth as Upaya Bharathi. It is a common faith that by worshiping her, one can receive blessings of Brahma, Shiva, and Vishnu along with Durga, Lakshmi, and Saraswati.

In the eastern half of the structure of Sri Vidyashankara Temple, a mandap with twelve pillars is present. Each of them is adorned with twelve signs of the Zodiac in order. These pillars are arranged in such a way that the rays of the sun fall on each of them in order of the 12 solar months.

A large Sudarshana Chakra can be seen in the Janardhana Temple in the complex. It is believed that offering prayers to the Chakra can ward off the feelings of enmity towards other human beings. It is also believed to protect devotees from all evil and harm.

The ritual of Aksharabhyasa is sacred and fulfilling. The parents of kids in the age of 2-5 are given a slate and chalk or alternatively, a plate of rice on which they pray to Goddess Saraswati and the Guru to impart good knowledge and education to their children.

Here is everything you want to know about Sringeri Temple