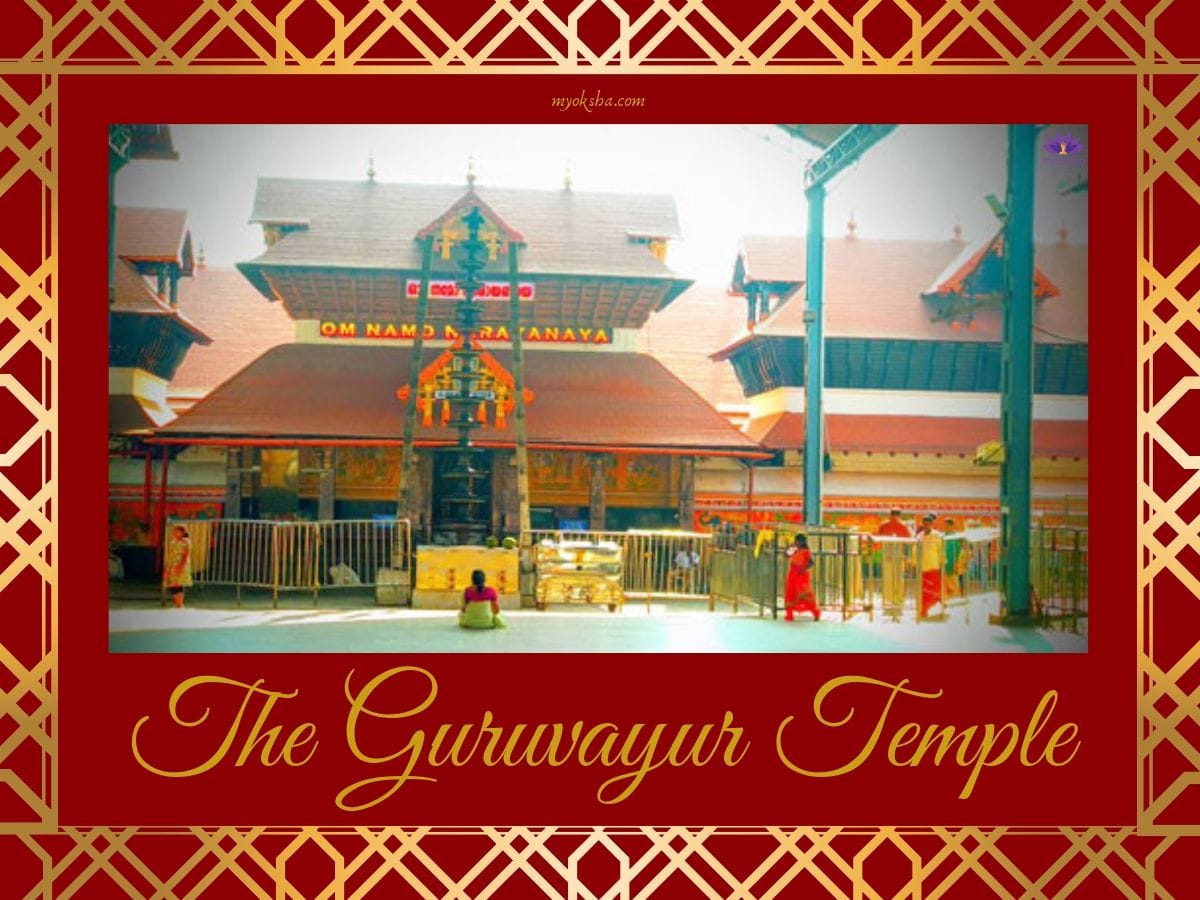 Guruvayur Temple is one of the most popular temples dedicated to Lord Krishna located in Guruvayur, Kerala. The main deity, Lord Krishna, here known as Lord Guruvayurappan (Father or Lord of Guruvayur) is represented as a four-armed God holding the Conch named Panchajanya, the Sudarshana Chakra, the Kaumodaki, and a lotus with a Basil garland.

Planning to visit the Guruvayur Temple? Have a look at our Kerala Temples Tour Package.

The Guruvayur Temple is referred to as the “Dwarka of the South“. The word Guruvayur can be split into Guru and Vayu, thus giving importance to the fact that the idol of Lord Krishna was installed by Brihaspati, the Guru, and Vayu, the God of Winds.

What are the timings of Guruvayur Temple?

Guruvayur temple opens at 3:00 AM and closes at 9:15 PM. The temple also performs various rituals during this time. The devotees can be a part of these rituals, such as the morning, afternoon, and evening poojas.

Guruvayur Temple timings are as follows:

What are the sevas and poojas at Guruvayur Temple?

What is the significance of the Guruvayur Temple?

The idol of the main deity is 4 feet tall and is made of the unique stone named Patala Anjanama stone. The unique stone is believed to possess healing properties. Every day, the water used for Abhishekam (bathing of the idol) is distributed to the devotees for healing purposes. The temple is well known for providing a healing touch to people suffering from major diseases like Leprosy and Tuberculosis.

The Krishnanattam is a unique service held at Guruvayur on all days except Tuesdays. The art form is a depiction of events in the eight stages of Lord Krishna’s life. The devotees can view the performances in the evening at the Mandapam as well as perform the seva to fulfill their personal wishes.

It is one of the richest and most visited temples of the country. The temple receives 6-10 million pilgrims every year. During the festive season, the number of visitors reaches 50,000 per day. The temple administration has a corpus fund of 400 crores and a Hundi collection of 2.5 crores per month.

What is the architecture of the Guruvayur Temple like?

The architecture of the Guruvayur Temple is simple and follows the Vastuvidya tradition. Guruvayur Temple faces east and has two entrances, the east, and the west. The central pillared hall, called Nalambalam is adorned with an array of lamps on its outer surface. The outer enclosure is called as the Chuttambalam in Malayalam.

The 33.5-meter high Dhwajasthambam and a 7-meter high Deepasthambam with 13 circular receptacles are situated inside the Chuttambalam. The temple also houses the shrines of Lord Ganapathy, Lord Aiyyappa, and Bhagavathi. The main Sree Kovil consists of the Garbhagriha and the Mukhamandapam. The famous Rudratheertham is situated north to the temple. All the articles in the Garbhagriha, including the doors and the roof, are made out of gold.

The temple has several synonyms like “Bhooloka Vaikunta” meaning “Abode of Vishnu on Earth”. It is also called as the “Dwarka of the South”.

What is the history of Guruvayur Temple?

According to the local population, the deity is believed to be 5000 years ago but the fact has not been scientifically proven. The earliest reference that one can find about Guruvayur is in the famous literary work in Tamil called Kokasandesam. A place called Kuruvayur is mentioned several times in the literature.

Guruvayur was once a sub-shrine of the Trikkunavay Shiva Temple. The Shiva Temple was destroyed by the Dutch in 1755. Melpathur Narayana Bhattathiri’s Narayaniyam, composed in the 16th century popularized the existence of the Guruvayur Temple around the world. The present structure of the Temple is believed to have been rebuilt in 1638.

It is believed that the central shrine (Sreekovil) and the Mandapam are as old as 1030 AD. The western gopuram was constructed in the 12th century. The Dutch raided Guruvayur in 1716 and the western gopuram was set afire. Guruvayur was subjected to further assaults by Hyder Ali in 1766 and by Tipu Sultan in 1789. In 1789, the Utsavavugraha (Utsava Moorthi) was shifted to Ambalapuzzha and the Moolavigraha to a safe underground sanctum. The Moolavigraha was re-installed and worship resumed after the victory of the Zamorins over Tipu Sultan with the help of the British Army.

The legend associated with the temple can be referenced to the Narada Purana. Lord Vishnu once appeared before Lord Brahma to grant salvation to him and his creations. On Lord Brahma’s request, he presented him with an idol of and made by himself. Some centuries later, Lord Brahma gifted this idol to King Sutapas and his wife Prasni, who were doing penance for a child. Lord Vishnu appeared to the King and his wife and stated that he will be born to them for their next four births. He also blessed them by stating that the idol will bless them in each of these births.

When Lord Krishna decided to forego the Earth and ascend to heaven, he decided to give the idol to Brihaspati (Guru) and Vayu, so that it could escape the destruction of Dwarka. Brihaspati and Vayu went southwards in search of a place to consecrate and worship the idol. They were enchanted by the sight of the huge Rudratheertham and on a visit there, met Sage Parashurama. The three together met Lord Shiva and Goddess Parvati on the banks of the Theertham and were eventually convinced by the greatness of the place by Lord Shiva himself. They decided to build a shrine there and consecrate the idol of Lord Krishna at the site. They entailed the services of Vishwakarma (Architect of the Devas) who built a grand temple within minutes.

What are the festivals celebrated at Guruvayur Temple?

Besides these festivals, Onam, Deepavali, Navratri, and Kuchela Dinam are also celebrated with great enthusiasm at the temple

Weddings at the Guruvayur Temple

Guruvayur is considered to be one of the most auspicious and sacred temples to get married in. The temple hosts many mandapams but it is necessary to start bookings months in advance.

The Sree Krishna Guruvayur Temple conducts approximately 40 to 100 weddings per day. During the wedding season, the number of weddings per day easily can be over 200. However, only family members and very close relations are allowed into the mandapam. Each ceremony lasts only for 3-7 minutes. This is because the mandapam needs to be prepared for the next wedding which is to be taken place on the same day.

What is the dress code at Guruvayur Temple?

Guruvayur Temple follows the strict dress code for both men and women. Men should wear a traditional costume like a Mundu (similar to a dhoti or a veshti). They should not wear any upper garments like shirts or vests. Women are allowed only wearing sarees, long skirts, and tops or the salwar kameez. Jeans, short skirts or dresses are not allowed inside the temple premises.

How to reach Guruvayur Temple?

Where to stay in Guruvayur?

The Guruvayur Devaswom has constructed the Kousthubam Rest House, Panchajanyam Rest House and the Sreevatsam Rest House for the comfort of the pilgrims. However, rooms should be booked in advance to the period of the visit.

The holy town of Guruvayur hosts a number of private hotels and lodges that are located in the temple surroundings as well as near the bus stands and the railway station. Alternatively, one can book accommodation at Thrissur city nearby and visit Guruvayur.

The cuisine here is mainly vegetarian. Non-vegetarian is not banned but it is rare in the town. South Indian dishes like Dosas, Idlis, Appams, Puttu, and Idiyappam are extremely popular and a must-have for visitors here.

The official website of the Guruvayur Temple is:
http://guruvayurdevaswom.nic.in/

Some other famous temples in Kerala are:

Is the Guruvayur Temple open throughout the year?

Yes, the Guruvayur Temple is open all 365 days of the year.

The entry to the Guruvayur Temple is free of cost.

The summers in Guruvayur starts from April and continue until June. The summers here can be very hot and humid. Temperatures during the daytime often go up to 38 º C.

If you have any questions about The Guruvayur Temple, please leave a comment below, and we will get back to you within one hour.